i hesitate to write anything, especially something for public consumption, regarding Martin Scorcese’s film “Silence,” because i am well aware of my limitations to say anything insightful about such a profound and layered work of visual art.

The film was, like Shusako Endo’s novel of the same name, powerful and endlessly deep in ways that i am only beginning to grasp. “Silence” is complex.

Endo’s writing, and Scorcese’s visually stunning interpretation of it, left me humbled by two encounters with greatness.

This is my humble attempt to connect some aspect of “Silence” with the reality of being a broken man who believes he has something important to offer other broken people.

The story begins as two Catholic priests, Fathers Rodrigues and Garupe, decide that they must set out for Japan at once to find their mentor, Father Ferreira, based on a story they have heard in which Ferreira has renounced Christ under intense persecution.

What unfolds as the fathers set sail for Japan is a journey of full of danger and discovery with every step.

There are countless spoilers in this piece, so if you haven’t read Endo’s novel or seen Scorcese’s film, you’ve been warned. The spoilers start now. 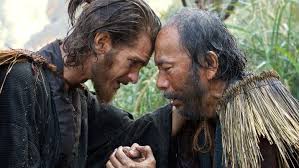 When i read Endo’s novel i had a visceral response to the climax of the story when Father Rodrigues steps on the fumi-e (a likeness of Jesus or Mary upon which the religious authorities of the Tokugawa shogunate of Japan required suspected Christians to step on in order to prove that they were not members of that outlawed religion).

Rodrigues recants his faith as the Japanese authorities make it clear that they will not spare Japanese Christians from repeated torture, despite the fact that they themselves had already recanted, unless the father steps on the fumi-e.

i had so wanted him to resist the multiple voices urging him to capitulate. Father Rodrigues, so earnest and zealous for the Gospel of Christ, seemed to me like a character who would never succumb to the pressure. Yet he did.

How are we to understand this? Is he still a padre? Is he damned?

Like Rodrigues early in the story, i resented Kichijiro — the Japanese man who vacillates repeatedly between faith and apostasy — even playing the role of Judas when he betrays Rodrigues to the Japanese authorities. i saw in Kichijiro only his lack of faithfulness and i thought him pitiful.

Under the slightest persecution Kichijiro folds like a house of cards. i confess i had contempt for him.

But then there comes the moment near the end of the story when Kichijiro seeks out Rodrigues to offer his confession despite the father’s apostasy. Rodrigues no longer sees himself as a priest, but somehow Kichijiro does.

In that moment i saw both characters in a whole new way.

Perhaps Rodrigues was still a priest.

One of the central themes of Endo’s novel is the tension that exists for those who are outsiders. Rodrigues and his companion Garupe are Catholic priests who venture to Japan as outsiders who bring an “outsider” religion. The Japanese authorities are highly resentful. Even after Rodrigues’ public denial of his faith, he still remains an outsider in Japan despite taking a Japanese name, dressing in the Japanese style, and cooperating with the local authorities.

In the story there is no way for Rodrigues to not be an outsider. Nothing can erase his “other-ness.”

The reality of being an outsider is something that men with compulsive sexual behavior within the Christian church have known for a long time. Men in the church who are disgraced by sexual sin have often been treated as outcasts and foreigners. Their sin seems to occupy a separate place on the list of ways that a person can offend God. More accurately stated, their sin seems to be on a separate list altogether.

Yet, in Rodrigues and in Kichijiro i see something that looks a lot like the struggle with compulsive sexual behavior, particularly the way in which we often repeat our acting out.

Do we find in those characters hope because, despite our own repeated renouncing of Christ through our sin, we — like them — don’t actually abandon the faith?

Again and again throughout the story, Kichijiro turns to Rodrigues — and by extension God — in confession and thirstily laps up the forgiveness of Christ afresh. So do we.

Throughout “Silence” Kichijiro bemoans the fact that he is a weak man. He repeatedly renounces Christ, but he is haunted by his faithlessness and he unabashedly runs back to Rodrigues to throw himself on the mercy of the father as he grieves his weakness.

Rodrigues eventually comes to love Kichijiro and he appreciates Kichijiro because in him Rodrigues sees the reality of who he has become: a formerly proud priest who is weak and needy.

The transformation of Rodrigues may actually make him more of a priest than he ever was before.

“Silence” speaks to me about the reality of how the treasure of the Gospel of Christ is carried in jars of clay (humans) which are easily broken (2 Cor. 4:7). Human weakness is the means by which the good news and grace of Christ is conveyed from one person to another. Human frailty, rather than disqualifying us from declaring the love and forgiveness of God, is what allows Him to show up and touch people’s lives through us.

As we embrace brokenness our pride is removed and His love remains. In our suffering and in our failure we express His kingdom and its values in a unique and powerful way. The way of vulnerability is the way of the priest, and we are all priests (1 Peter 2:5).

Sexually broken men, the “outsiders” of the Christian church, carry within them a treasure that the church desperately needs. It is our failure and brokenness that uniquely equips us to testify to the fact that God chose vulnerability at the cross, and as Jesus was broken there, mercy flowed.

Meanwhile, we minister to the Kichijiros in our midst: the repeat offenders who suffer through their weakness and keep crawling back to God.

For at some level, we are all Kichijiro.

The final scene of the film is also for me one of the most enduring images of the story. Rodrigues’ body is placed on the funeral pyre, his long and conflicted life finally finished, and in his hand we see a crucifix.

Rodrigues is not lost. Neither are we.